Hunter’s shoulder hurt, but not so much thanks to the adrenaline, and his mind was hyper focused, that cold furious rage from his childhood flared up as he saw Erick and Samantha’s dead bodies. Whoever they were, they were going to pay for what they had done. You just don’t kill good people and get away with it!
He was on the radio a second later, calling in ’Officers down’, their location and that he was still in pursuit when Ferguson screamed.

"YOU GOT TO BE FUCKING KIDDING ME!"

He looked back, his eyes growing wide. What the fuck are these people?
”That’s not possible.”

Pushing that to the back of his mind, he returned his focus to catching up to the truck. They can’t have gotten far, no way a loaded truck was faster than the patroler, even with the windshield shot to hell. 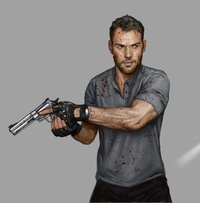 Pherguson got half of her body out of the car aiming with her pistol, making a bullseye, with a round shot, in the back right tire, this woman was incredibly accurate. The truck's tire exploded due to its weight and the bullet piercing it through, making the cargo slam the door heavily, forcing it open and one of the barrels to roll out and against the paviment.

The biker its just behind the truck and its taken by surprise, forced to evade the rolling barrel he misdrives and collide with a post in the sideway. The biker is expelled violently, rolls over the concrete and ends landing against a kiosko a few yards away. The bike on the other hand its destroyed and its gasoline spreads over the paviment, to be ignited seconds after by the motorcycle's spining wheel against the electric post, that sparked over the spilled gas.

The barrel is rolling over the gasoline and starts to get hot as it gets close to the patrol engulfed in fire. Hunter takes the opposite sideway to evade the rolling barrel and not ten seconds later the flammable cask explodes, filling the air with a powerful chemical smell and a heat wave envolving the patrol.

Having thrown himself out of the car, Hunter lay on the pavement. His ears were ringing and disoriented after the explosion, he struggled to his feet and surveyed the scene. What fucking mayhem!

As he shook of the worst of the disorientation he realized that they needed ambulances and the fire department, he radioed for that as he moved towards the truck, the doors needed to be shut so no more barrels rolled out. He needed to secure the driver and the biker. Where was Ferguson? He looked around for her. He yelled over the roaring fire. Please be ok, this night was bad without another cop dead.
”Ferguson! You ok? Talk to me!”

That’s when he remembered the second biker, following in a stolen car. Fuck! He drew his gun, shaking of more of the disorientation.

Pherguson was taken by surprised by the explosion and slamed her head against the frame of the door, opening another wound added to those of the shattered glass. She says.
"I'm ok, goddammed! Keep moving I need to catch those bastards! We need to close that fucking door a.s.a.p. this can blow the entire fucking block if it gets fire!"

Many other patrols blocked the other ways blocking the truck from escaping. This was the end of the road for those bastards. However, the madness in them had not yet be defeated, the driver ignited a match and was about to fire a wick when one of the officers started shooting and with him everyone else did as much, even Pherguson started shooting to kill the bastard... but it was too late.

Thank the gods, she was ok. Now the fuckers were cornered, they wouldn’t get away. Hunter ran towards the downed biker since Ferguson apparently had the same idea as him and was already was moving towards the truck. The biker needed to be cuffed and secured if he wasn’t dead. If the first one was an indicator this one was still very much a threat.

He didn’t get further any in his thoughts, instead he was disrupted by gunfire and then a second, huge explosion. The shockwave slamming him to the ground once again.

The explosion of cataclysmic proportions throws Hunter and Pherguson in the air engulfed in flames, the last thing Doyle saw was the fire, then he felt the wall behind him slaming his back into unconciousness and the last thing he thought was the picture of Maggy and Chloe smiling at him in the dark.
_________________