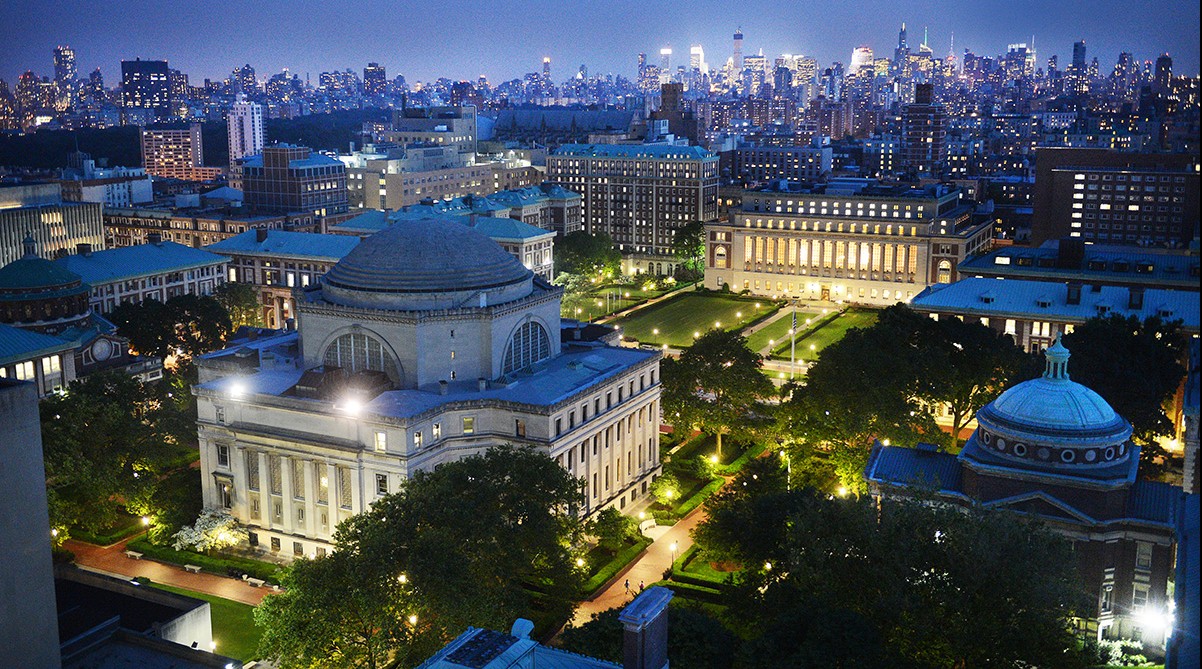 The Manhattan Chantry was located in, around and under the Columbia University of upper Manhattan. Founded in 1756 was the home of scholars and academics from the highest level of education and strongly dedicated to uncover the mysteries of the reality, widen to some when vampirism is discovered.

That interest for research and the strong static ressonance of vampiric magic resistant to all kinds of paradox energy, made the University the perfect spot to create the largest Chantry in America. Also the home of several Freemason Lodges such as the Columbia Lodge and the Grand Lodge of New York where the Tremere welcomed membersof the Arcanum among other occultist from the entire World.

St. Paul's chapel inside the Columbia U is the entrance to the first and most important underground building, however the compound had other five structures, each with its own Regent to handle domestic affairs. The Clan as a whole had seven Lords one to control upstate affairs Ephraim Wainwright and other six in each of the most renown universities in the City, among them the Columbia University with Lord Lucien de Maupassant, one the most powerful and paranoid kindreds in the Tremere Clan. At the top of the city Pyramid is the Pontifex and Primogen of the Warlocks Madam Helena Blavatsky.

Tonight was a special night, all Regents and Lords were summoned by the Primogen to discuss an urgent matter. Measures of security were extremed, both natural and unnatural forces used to prevent any incident is such concentration of kindreds in one place. The University Campus was sealed and all ghouls except for the minimum to support the apprentices to serve the higher ranked were deployed with magical artifacts and weaponry, ready to turn to ashes any uninvited guest.

Several Wards were set around and inside the main compound to avoid even the ghost or the shapeshifters to evedrop on the meeting. The sensation shared and gossip by the apprentices and magisters was uneasy and war preparation like. No one had ever been this tense since the overthrown of the Sabbat years ago.

Lady Aisling Sturbridge and Lord Lucien de Maupassant were the first two to enter the St. Paul's entrance the gate was heavily guarded by two huge stone golems enchanted with powerful charms to empower them, also in the upper niches of the chappel countless imps were hiding with their pyrokinetic powers to blast any and all intruders as soon as were spoted by the close range defenses.

The two kindred with a long tail of seven magisters and fourteen apprentices walked in two lines towards the back of the Chapel discussing the gossips about an attack against Lord Wainwright chapel. The attack was a fact, reported in all media as an earthquake with a resulting sinkhole to cover the disaster.

Lady Sturbridge, Regent of the Barnard College Chantry and Childe of Lord Lucien, was mentioning to her Sire that her contacts among the Toreador informed her that the Gangrel Gate was deployed inmediately after the attack and called them to cover up the incident right way. The situation was described as monstruos, all ghouls were killed in the incident and the kindreds minds destroyed by an unknown force, that left them staked at the bottom of the pit, pressumibly to diablerized them later if the Gangrel had not came to investigate right away.

Once they reached the center of the Chapel an enchanted circle with teleportation magic activated on voice command by one of the seven apprentices protecting the entrance, transporting the sixteen kindreds to the second level that had an electric taste in the air due to the massive amount of magic present. Seven kindreds were in a higher level looking down to the comitive, preparing all sorts of spells to be cast in case of trasgression of their domain. The security cameras confirmed with a green light and authorized finger print and voice recognition of Lord Lucien in the center pillar of the underground level.

Lord Maupassant was intrigued by the situation, he continued the conversation asking if any of the attacker was identified by the Gangrel or any other observer. His Childe negated explaining that the attack was underground, with some kind of magic tunnels where created to access the magically protected location and undermining its foundations to make it fall and the attackers left by the same means.

Lord Lucien asked himself in silence. <Are the mages against us again? Is this kuldun magic? What enemy is knocking on our door? No one in the Camarilla holds that amount of power. It has to be the Tzimisce.>
_________________

Already at the second basement floor were two other Lords awaiting for the Pontifiex to show up: Eugenio Estevez and Aidan Lyle, the Sire of Lord Ephraim Wainwright. The two of them were talking surrounded by their respective Magisters and Apprentices.

Aidan had an homunculus in his shoulder, an small humanoid rat like creature with black hide, yellow eyes and sharp claws that was playing around, climbing up and down on it's masters robe. The kindred seemed worried and upset about the situation, specially because his Childe was involved and his Chantry destroyed. That and all assets of the Clan ruined in the process.

Eugenio on the other hand was hearing Lyle speaking about the terrible things he would do to the responsables of this crisis and damage to his progeny. When Maupassant and Sturbridge arrived the two kindreds bowed respectfully to the High Regent Lucien and his Childe, whom bowed as well and Maupassant was the first to speak.
"Good evening Lord Lyle, Lord Estevez. Nice to see you again.

Forgive me but I couldn't help to hear that you are about to boil someone in oil. Have you already figure out who is responsable for this regreatful situation?"

Aidan's homunculus screetch and hided behind Aidan's back. While Lord Lyle said.
"My Lord Lucien, sadly I can only night dream about the things I'd do to the transgressor. The vile creature that did this was certainly a Kindred with a mastery in the Animalism discipline, also a master over the elements to create a heavy fog and cast an earthquake against my Childe's Chantry.

All Kindreds in the premises were turned to animals and stake throught their hearts and the prisoners that our clanmates were interrogating are now gone. My theory is that they were rescued by the Sabbat or may be one of them was responsable for all this."

Lord Eugenio complemented the prior saying
"I've read that some Tzimisce, a clan with natural affinity for Animalism, have a certain type of blood magic they call Kuldunic which can display some of the effects we already know about. As I was explaining to Lord Lyle the odds are that the Sabbat have returned to the upstate of New York looking to break in the City and retake control.

I've heard that a few nights ago was a breach in the animal's gate allowing some Sabbats to enter the City. Also that three of those kindreds are still on the lose. My theory is very similar to Lord's Aidan's but includes a Sabbat scheme to retake control over the city."

A bell tolls three times indicating that the magical seal of the Chamber was finally open and the Pontifiex was about to arrive. All Tremere started to walk inside, except for the apprentices.
_________________

The portals opened to allowed access to the three quarters of a circle amphitheater within a huge room with no doors, which instead of the usual lower center flat surrounded by high steps, has a Golden Throne over a high pilar, which is surrounded by sixth more Silver Thrones on lower pillars. Around these seven sits are the steps: acolytes in the lower part, the base, apprentices just over them, then two more Regents sitting on bronze thrones at the border of highest part of the steps, with their respective Magisters sitting next to them in fancy chairs and the remaining six Magisters between the two bronze thrones.

The bell tolls again seven times and another three portals opened at the back of the amphitheater where the Silver Thrones and the Gold one were. The first three Lords came to sit in the closest Silver Thrones to the steps, then another one came to sit to almost complete a circle, leaving one throne empty. Afterwards Sir Aleister Crowley, Lord of Quaesitori and Regent took the central silver throne scorting the Pontifiex and Primogen Helena Petrovna Blavatski to sit in the Golden Throne to complete the circle.

The bell tolls three more times and Sir Aleister Crowley stands up to recite the initial spells to activate the secrecy and protection spells to ward all planes surrounding the material one and closing scrying and other divination or communication spells in or out of the sanctorum. After he is finish a powerful relic used to increase the potence of his voice fills the chamber with the following message.
"GREETINGS KINDREDS OF TREMERE AND WELCOME TO THIS GRAND CONVOCATION!

OUR PONTIFIEX MADAM BLAVATSKI HAS SUMMON US ALL TO EXPLAIN THE EVENTS THAT LEAD TO THE DESTRUCTION OF THE ALBANY CHANTRY AND HARM CASTED UPON ITS REGENT AND ALL OTHER TREMERE PRESENT AT THE MOMENT OF THE ATTACK."

The Lord sits down and the Pontifiex using the same spells stands up.
"CHILDREN OF THE CLAN TREMERE OUR CHANTRY IN ALBANY ITS BEEN TURNED TO DUST, ALL GHOULS KILLED AND MANY ARTIFACTS STOLEN OR DESTROYED. THIS OBLITERATION WAS CAUSED BY A POWERFUL MAGICAL ATTACK WHICH MADE THE ENTIRE CHANTRY FELL DOWN INTO A SINKHOLE!

AFTER ITS DEMISE THE MIND OF THE KINDRED INHABITING THE CHANTRY WAS DESTROYED BY A POWERFUL USE OF THE DISCIPLINE ANIMALISM RENDERING OUR BROTHERS AND SISTER AS NOTHING MORE THAN ANIMALS!

WE DO NOT KNOW WHAT OR WHO CAUSED THIS DESTRUCTION BUT WE ARE GOING TO FIND OUT AND WHEN THAT HAPPENDS THEY WILL KNOW THE WRATH OF CLAN TREMEREEEE!"

Her final words were acompanied by a noiseful cheer from the crowd.

"THE PRINCE HAS ORDER US TO RECEIVE THE GANGRELS AS OUR PROTECTORS AND COMMANDERS IN THE UPSTATE OF NEW YORK TO FACE THIS MONSTRUOS UNKNOWN ENEMY. WE WILL NOT ACCEPT THIS TUTELAGE FOR LONG BUT FOR THE MOMENT OUR POSITION IN THAT TERRITORY HAS BEEN WEAKEN AND WE MUST USE THE BEAST STRENGTH TO OUR ADVANTAGE."

A great silence came and then murmurs began below in the lower ranks. Sir Aleister Crowley stood up and shout for silence and order. Silence came again and the Pontifiex was able to continue.

"INSUBORTINATION WILL NOT BE TOLERATED, WE MUST ACCEPT THE HELP OF THE CAMARILLA AS THE PRINCE HAS ORDER US TO RECEIVE IT. THE GANGRELS WILL HAVE ACCESS TO THE REMAINING CHANTRIES UP STATE NEW YORK AND WILL USE OUR FORCES TO PROTECT THE CITY.

LORD CROWLEY IS NOW IN COMMAND OF ALL TREMERE UPSTATE AND HE WILL INSTRUCT YOU WITH YOUR DUTIES."

After a great silence Aleister said.
"I WILL ACCEPT THE ORDER OF OUR PRINCE MICHAEL BRIGHT AND THE HELP OF THE STRENGTH FROM GANGRELS TO PROTECT THE REST OF OUR POSITIONS AND POSSESIONS UP NORTH. ALL TREMERE WILL ACCEPT THIS NEW ALLIANCE AND WORK WITH THE CLAN OF BEASTS IN THE COMISSIONS YOU'RE CALLED FOR.